Stunning admission – and a new excuse for ‘the pause’ – ‘lousy data’

Global temperature is no longer an indicator of Global Warming!
Question: Why not?
Answer: Because the warming has stopped 18(!) years ago!
Fortunately, some things still seem going up – even if not by as much as the alarmists would want – like sea levels

“The Models didn’t have the skill we thought they had…”

The Guardian, a prominent green UK daily newspaper, reports that scientists have given up on surface temperature as a measure of global warming:

Stephen Briggs from the European Space Agency’s Directorate of Earth Observation says that sea surface temperature data is the worst indicator of global climate that can be used, describing it as “lousy”.

Are you scared yet? Will the Cape Flats be inundated? Relax, this NY Times dire warning dates from 1986! So we still have two whole years to prepare for the “worst”

Winston Spencer Churchill’s refusal to cower to Adolf Hitler’s overwhelming power raises him to among the greatest defenders of freedom in all history. The Normandy invasion and the subsequent liberation of millions of people in Western Europ….

Biomass On Fire In Yorkshire

The law of unintended consequences! A pile of wood chips will self-ignite if it is over a critical size. Replacing coal fired industry with wood fired seems like a bad idea.

NOT A LOT OF PEOPLE KNOW THAT

Firefighters are spending a third day tackling a major blaze at a wood recycling plant in South Yorkshire.

Four crews have been at the R Plevin and Sons’ site in Crow Edge, near Penistone, since the wood chippings fire was discovered at about 08:10 BST on Monday.

Smoke can seen seen six miles (9.7km) away in Barnsley and smelled from Sheffield, 17 miles (27km) away.

People living near the fire have been asked to keep windows and doors closed.

The blaze could take another two days to put out, South Yorkshire Fire and Rescue Service said.

Station Manager Andy Hoyland said a water pump from a neighbouring brigade was being used to carry water from a nearby reservoir, to help extinguish the fire.

The blaze was “a big job”, said Mr Hoyland. 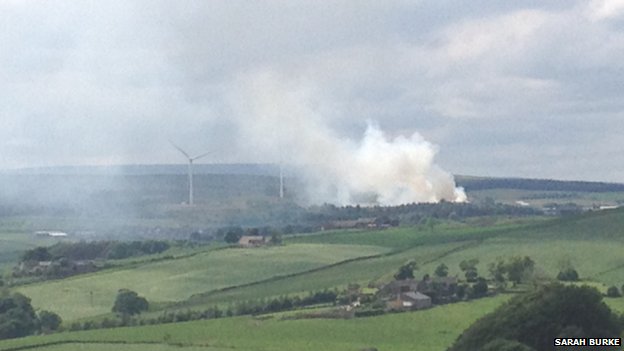 The blaze, which can be seen and smelled from miles away…

Spaceweather.com
A Catastrophe of Comets

The geophysical world according to me, and a few folks I happen to agree with

"the relentless pursuit of common sense" FEATURED ARTICLES are at the TOP. SCROLL DOWN for TODAY'S posts.

Astronomy, space and space travel for the non scientist

Isle of May National Nature Reserve

Global warming, climate change, all these things are just a dream come true for politicians. I deal with evidence and not with frightening computer models because the seeker after truth does not put his faith in any consensus. The road to the truth is long and hard, but this is the road we must follow.